What Energy Investment Should I Make Next?

We have a limited amount of discretionary money to spend each month. Discretionary money is what’s left after all the bills are paid. We could spend it on things that return fleeting pleasure like dining out or going for a drive. But what about if we spent it on something that reduced our mountounaius monthly energy bills? A strange thing happens then – we have lower bills and more money left over next month. And if we do the same again next month, we have more and more money, and smaller and smaller bills. This is the sweet art of investing in energy savings. Plugging up the gaping holes through which our hard earned money pours out.

But how do we know how to spend our money to save the most in the future? This is what the electricity costs for most common appliances in the house:

But how do we know how to spend our money to save the most? It’s actually pretty simple now that we have an energy monitor which tells us exactly what everything in our house costs to run. 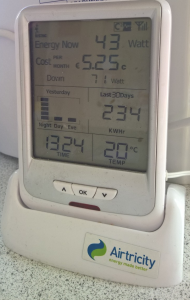 The Current electricity consumption of your home.

We can now use this to figure out how much electricity things are consuming in the house and how much that’s costing us. That allows us to rank the worst offenders in order of how bad they are. We then look at how much it would cost to replace that item with a model which would save money in the long run. If the light bulbs currently in the house cost €10 to power each month and it would cost €60 to replace them with LEDs consuming almost no energy, then this change would pay for itself in 6 months. After that time, you will have €10 extra a month to spend on whatever you like. This is known as the payback period, and we can use it to easily work out what would return the greatest bang for our buck, and hence what we should do next.

What is a kWh? kWh means kiliwatt hour. It’s a unit of energy consumption. It’s used by your utilities to measure the energy you’ve consumed. If you run an appliance which consumed 1kw for one hour, it has consumed 1kWh.

That’s all the information we need to work out:

If we work this out for all of our appliances / energy demands in our lives, understand what a more energy efficient alternative would cost and what it would save, we get a ranked list of energy investments which will save us a lot of money. Number one on the list is what you should do next.

If you haven’t managed to get an energy monitor yet, here’s a rough guide as to what things around the house consume:

If you want to calculate these for your own house, you can use the spreadsheet here, but this will likely be a good approximation for your house. If you don’t use air conditioning, then you’re already on the way to spending less on energy.


As we can see from the chart – there are a lot of low hanging fruit to improve and save us money!

I am in a position where I can access wood for quite a bit cheaper than gas so I priced having a wood burning stove installed in the house with a back boiler to heat the water for the house. The stove, back boiler, new highly insulated hot water tank and plumbing came to €4000. I estimated that the running costs (e.g. the wood) would cost €155 per year. That all adds up to a saving of €1,046.06 – €155 = €891.06 a year.

That’s a return of 20.72%. A hedge fund manager would be a superstar if he could deliver a return of 20% on your money for even two years in a row. Not only would this investment return that for the next twenty years – it will probably return more. Most of our calculations are comparing cleaner and more efficient energy sources against fossil fuels. Fossil Fuels will almost definitely become more and more expensive in the coming years. The more expensive they become, the more this investment will return.

That’s a lot of money to have to spend on other things!

Get Notified of New Posts Here!